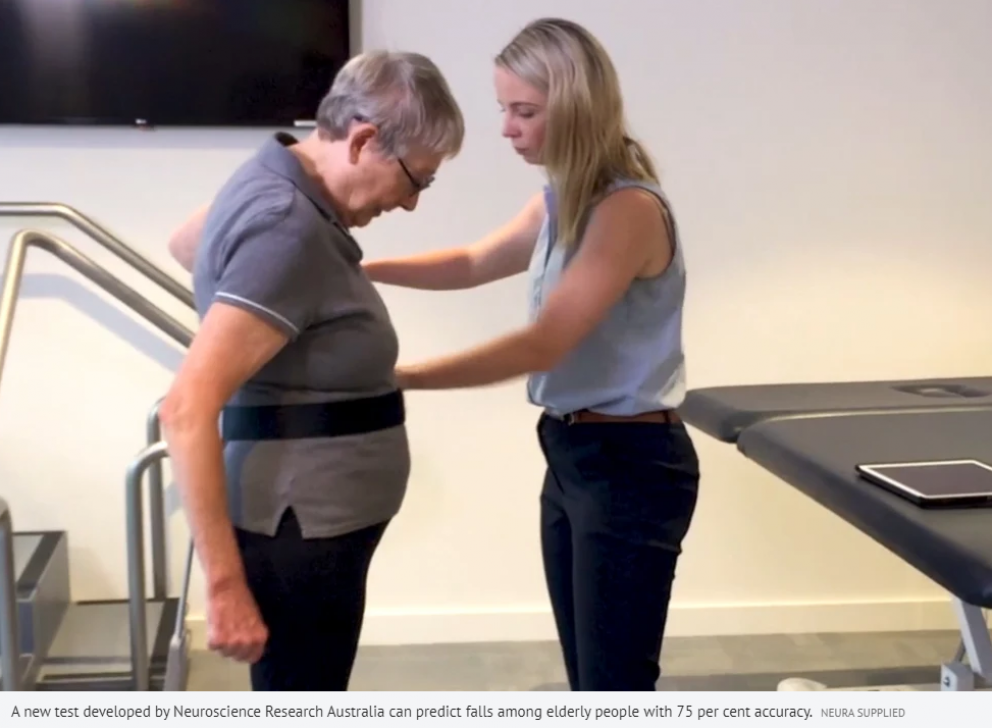 A new test will be used to prevent the “one thing older people fear the most” – a fall, said Professor Stephen Lord, a senior principal fellow at Neuroscience Research Australia.

The new screening test, launched today, can predict with 75 per cent accuracy the risk of someone over 60 having a fall – and recommend ways to prevent one.

To most old people, the thought of a fall was more terrifying than a bag snatching or a household break-in because falls often lead to “losing independence and ending up in a home”, said Professor Lord who has been researching falls prevention for 30 years.

“You go from home, into the Emergency Department, and into care. It can be the change in your life,” he said.

Research shows one in three people over 65 will have one or more falls every year.

At the current rate, NSW will need to build four new large hospitals “the size of Prince of Wales hospital by 2050” to cope with falls-related injuries as the population ages, said Professor Lord.

The cost of falls to the economy is greater than any other injury, including car crashes, he said.

Of those who are hospitalised, about 10 per cent will move to a nursing home for the first time.

One in three people who have a fall-related hip fracture will die within a year.

About 27,000 people are hospitalised after a fall in NSW every year, said the NSW Minister for Health Brad Hazzard launching the new screening test on Tuesday.

This put a huge burden on the health system, he said.

“But imagine what it is for those individuals. It is such an impost on their life, and can be the beginning of major problems. All of us would know someone who has had a fall, and seen how that has been the start of a decline. Perhaps not being able to get out of their house, [and] psychological issues,” said Mr Hazzard. “It can be a disaster (and) not just one fall.”

The collaboration between NeuRA and the aged care company, the Mark Moran Group, to develop the app was “terrific”.

The kit, called FallScreen +, will initially be trialled at aged care facilities owned by the Mark Moran Group, and Mr Hazzard said he hoped it would be adopted more broadly as a way of detecting and preventing falls.

The culmination of trials involving 20,000 people, the kit will also be released as an app pitched at those who work in aged care, including physiotherapists, psychologists and others. A simplified test is being developed for general practitioners.

Because not everyone falls for the same reason, Professor Lord said the kit included nine different assessments.

FallScreen+ can screen issues early, in people as young as 60, flag problem areas and make recommendations for treatment that will address potential risks and reduce the risk of falls.

The tests relate to general wellbeing, including pain and mental health; regular exercise; executive function (which includes ability to assess and negotiate hazards in an unfamiliar place), and eyesight, including ability to see light and shade (which helps to avoid trip hazards).

It also asks questions about daily tasks which a person may fear, such as changing a lightbulb or going down steep steps because this “fear” is a risk in itself.

“What we have been able to see is that there are key risk factors, relating to vision, not being able to see hazards, balance, sensation (particularly in the lower limbs), our reaction time, and our ability to stand up on our own two feet,” said Professor Lord.

When asked what was the single most important preventative measure, Professor Lord said, “By far the best is exercise, and the most single component is balance training.”

From the day we start to toddle, every step is a fall waiting to happen.

“Every step you take is inherently unstable, we continually adjust, catch, adjust again. It is a bit like a controlled fall,” said Professor Lord, who has published more than 400 papers on balance, gait and falls in older people.

And when it comes to why some people stay more mobile than others, he said it was a case of “use it or lose it”.

One of the tests measures stability and balance by measuring how far someone moves while standing on a large square of foam – while connected with a rod to a screen that tracks how much and how far they moved. The results resemble a pattern like an old fashioned Spirograph.

The co founder of Mark Moran Group Evette Moran said breakthroughs like FallScreen+ will create a future “where older Australians will continue their interests, their passions, their health.”