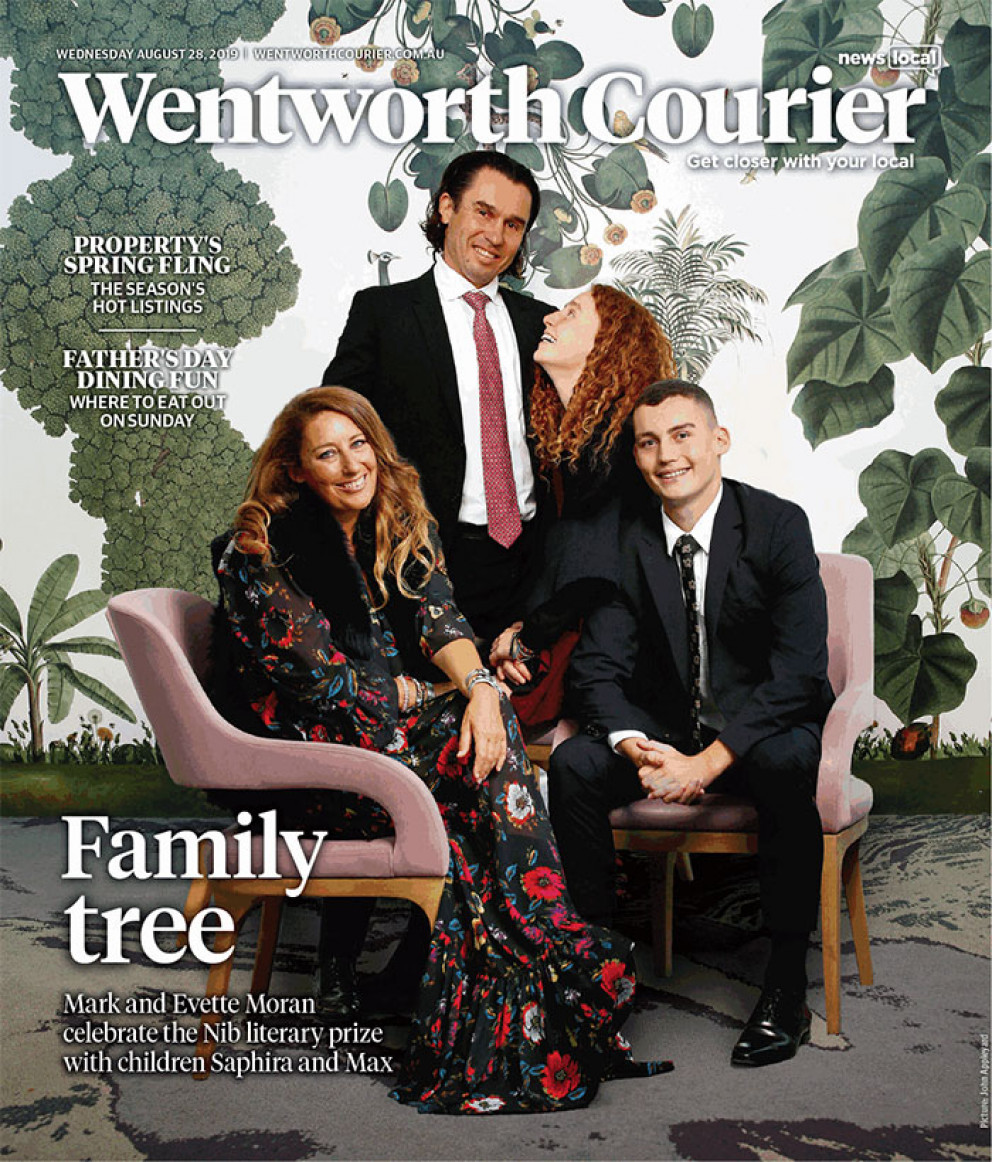 Mark and Evette Moran with their children Saphira and Max at Botanica. Picture: John Appleyard

Mark and Evette Moran are warm and outgoing people; he bright eyed and enthusiastic, she with a broad smile, an infectious low chuckle and a winning sense of humour. So it’s quite a revelation to hear that when Evette Robinson met Mark Moran 30 years ago it was, as he, with disarming frankness, puts it, “hate at first sight.”

Well, not quite hate, but certainly no sparks flew.

Both had been invited, independently, to an art opening in Balmain of works by a mutual friend.

Mark recalls the incident: “I was opening the exhibition and not feeling well. I got out of my sick bed, put on a bright red, second hand Versace jacket. I guess I looked rather theatrical.”

“I thought he had no dress sense. He looked like Mister Westfield,” recalls Evette with a rollicking laugh and a flick of her long auburn hair. “We turned our noses up at each other.”

Well, it turns out that it was not the wearer so much as that red jacket that was the turn-off.

At subsequent encounters, things improved markedly. They married in 2000 at Swifts, the family’s grand, Victorian neo-Gothic pile on Darling Point that his parents had purchased and restored.

Now, two decades and two children later their lives seem to be in closest harmony, just like the sound produced by the old-style Barber Shop Quartet in which Mark’s dad, Doug Moran, founder of the eponymous health care empire, used to sing.

Mark runs the business, Evette has creative control of the style and decoration of the various retirement homes. All decisions are made together. “We’re both creative people,” says Evette. “People ask me how I can possibly work with my husband. It’s because we are equal partners.”

I meet the Morans in Botanica, an upscale restaurant, open to the public as well as those residing at Mark Moran Vaucluse.

Built on the site of the former Vaucluse High School, this is the latest and by far the most sumptuous of a chain of Moran-branded nursing homes and retirement villages that stretch from Australia across the globe via China to the UK.

For our chat and for the family photograph that graces the cover of this issue, Mark wears a navy suit and an Hermes tie, soon removed. Evette is in a long flowing floral printed dress. Her accessories are choice examples of silver jewellery set with bright turquoises of varying size. Both are now 50.

Their children are polite and well-mannered. Saphira, 17, seems more exuberant and outgoing than her brother Max who is two years older. He is set on joining the army, while his sister wants to be an actor. This makes sense as both parents reveal they once set their sights on careers in the theatre.

Evette, when just 15, studied at the PACT Theatre Company in Erskineville. As a young man Mark too had aspired to tread the boards and applied for a place at LAMDA, the London Academy of Music and Dramatic Art, the United Kingdom’s oldest drama school whose distinguished alumni include Benedict Cumberbatch, Donald Sutherland, Jemma Redgrave and a slew of other marquee name thespians. “They had applications from 8000 kids across the world. I auditioned and there must have been something there but I don’t know what it was.

“I made the cut.” I ask what was his most memorable role in student productions.

Was he relegated to a position of third spear-carrier to the left in Julius Caesar?

We’re both creative people. People ask me how I can possibly work with my husband. It’s because we are equal partners.

“I did OK,” he replies. “I had a decent part in Macbeth and a few of the other productions, and I spent two years there, but I didn’t pursue acting as a career.

“I had a business background and was running a publishing house, so I thought I’d be better off coming back to Australia and making some money and then putting it back into the industry and the arts.

“The best path for me was making money. I did that but too late. The business plan I had didn’t play out.” Evette looks at her husband admiringly: “He’s a man of many talents”. She reveals a family tradition each Father’s Day — it’s “always a family day where Mark gets to be king for a day and do whatever he feels like,” she says.

Sunday will start with “a homemade breakfast, possibly a bush walk or a day out at the beach and a BBQ … (it’s a) simple and laid back affair.”

Mark looks out through the floor-to-ceiling glass wall of Botanica’s lush surrounding gardens, to the wall of balconied apartments, admiring the detail.

“This place, he says. “This is my best achievement.” Indeed, there’s much to admire. Starting with this glamorous restaurant, open to the community, among whom it’s become a favoured brunching spot on weekends. Chef Perry Hill’s CV includes stints at London’s famed River Cafe and at Janni Kyritsis’ splendid MG Garage in Surry Hills and today’s tapas-like sampling is polished indeed. Like many current chefs, he has a modish kitchen garden supplying herbs for his dishes. Add to this on-site eatery and adjacent providore, a gym, pool, library, several bars, an art studio, coffee shop, cinema and a rooftop garden with mind bending views of the ocean, the city, the harbour and surrounding platinum plated suburbs — and you have something akin to a resort with the whiff of a smart club about it. Here, residents are referred to not as residents, patients or, perish the thought, inmates, but by the gentler, chummier handle of members. If one had the choice (and the means!) there could be few better environments in which to pass one’s twilight years.

Above: The Morans with then Prime Minister Malcolm Turnbull photographed at Mark Moran Vaucluse in 2016

I learn that a former colleague, a distinguished journalist, is living here. As is Mark’s mother, Greta. After the family patriarch Doug Moran died in 2011, aged 87, his widow Greta moved out of Swifts to an apartment in the city, which she found uncongenial, and then to the sunnier, purlieu of the Vaucluse complex where, according to Mark, she is very happy.

Every family has its ups and downs and the Morans are no exception. The extended family’s internecine conflicts have been so extensively and so publicly chronicled as to need no rehearsing here.

Mark seems keen to put negativity behind him, embracing an older family history, that of prominent colonial citizen Robert Cooper. Convicted of theft, Cooper created legal history by pleading guilty to the minor crime of smuggling as opposed to theft.

He was sentenced to 14 years transportation, served five, was emancipated and gained significant respectability in the fledging colony of Sydney.

Among his many pursuits, Cooper was a brewer, noted for his gin, hence the name Juniper Hall applied to his 1824 residence which still stands in Oxford St, Padding-ton, and serves as home to the Moran Arts Foundation Collection. A further nod to family history is the creation of an eponymous new age drink, Robert Cooper’s Super Excellent Gin.

The best path for me was making money. I did that but too late. The business plan I had didn’t play out

The ancestor thus memorialised might not have approved of the ball and chain on the label but would have been gratified by the multiple awards his 21st century spirit has clocked up.

Philanthropy has been another hallmark of the Moran mini-dynasty. Unlike many other local tycoons, father Doug took a keen interest in culture.

That interest continues. When the annual NIB Literary Awards, inaugurated and funded by Waverley Council, were threatened with extinction, Doug’s son and daughter- in-law rode in on white chargers and pledged $30,000 in prizes to keep the awards alive. The long list of 17 titles has already been announced.

Finalists and winners are yet to come, but a couple of eastern suburbs booksellers already have favourites.

If public reaction, sales and topicality suggest a winner, then for Simon McDonald of Potts Point Bookshop it’s No Friend But the Mountains by Manus Island detainee Behrouz Boochani.

“It’s fantastic,” he says, hedging his bets a tad with a second choice:

“But City Of Trees has also been very popular and Fiona Wright always sells.”

A final word from the awards sponsors, Mark and Evette Moran: “We feel honoured to play a small part in the lives of our extraordinary writers.”